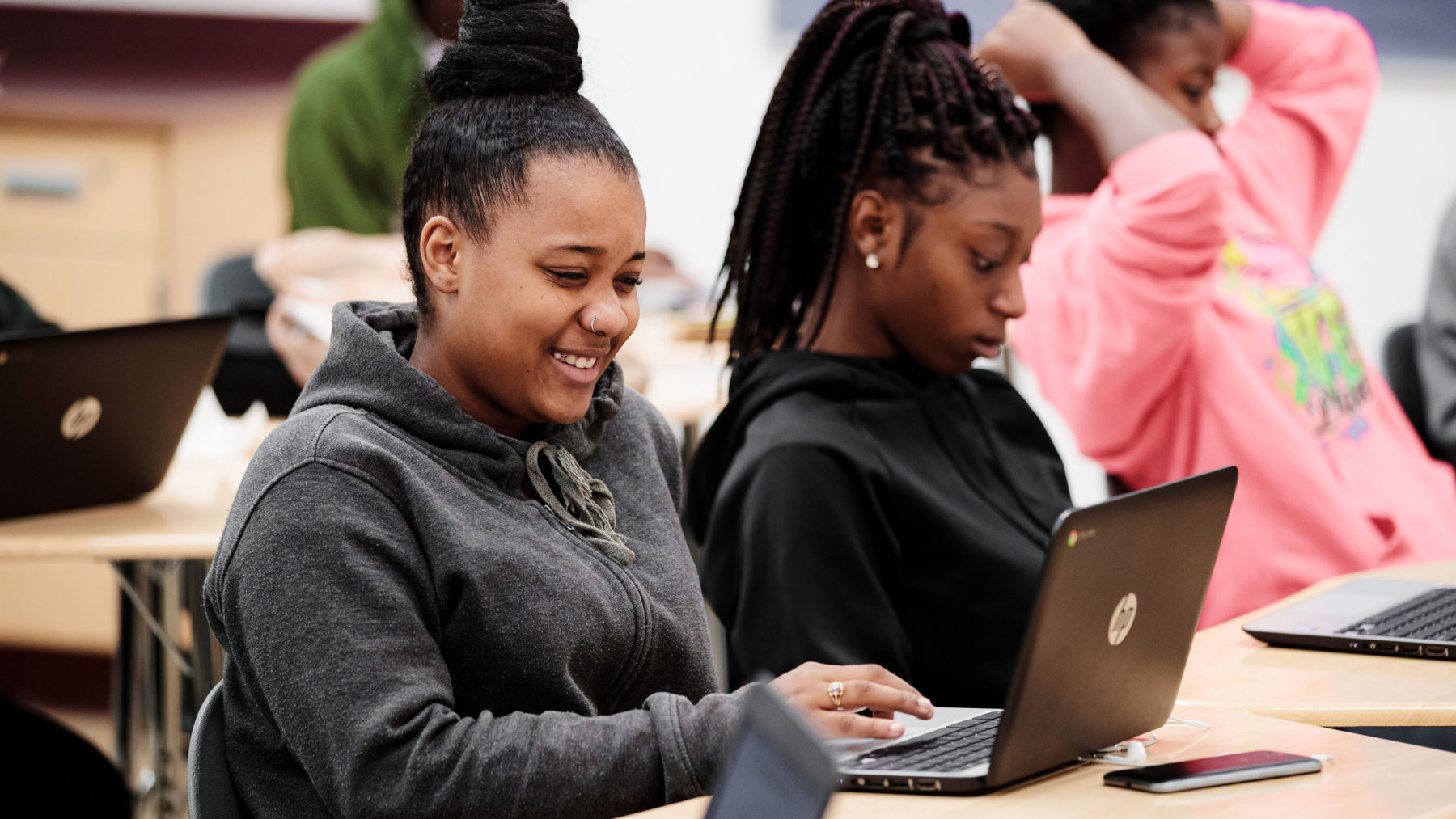 One narrative about the wealth gap in the United States claims that it is at least partially driven by a gap in financial literacy: If people simply knew more about money, they would make better financial decisions, and more wealth would undoubtedly follow.

And indeed, financial education is becoming increasingly popular: 24 states now require that high schools offer a personal finance course, up from just seven states in 2000. Students across the nation are learning about the difference between wants and needs, about diversifying an investment portfolio, and about the nuts and bolts of opening and maintaining savings accounts.

There’s just one problem: The supposed financial literacy gap doesn’t exist. Kids across the income spectrum have similar levels of financial knowledge, but that knowledge doesn’t put money in the bank for low-income kids, and it won’t fill the United States’ approximately $14 trillion wealth gap.

Data from education technology provider EVERFI show that low- and middle-income students know as much as their higher-income peers about savings accounts, and they’re eager to save for future financial goals like buying a home or investing. But they don’t all have the resources to do it: Though 53% of low-and middle-income students named paying for education as a five-year goal, only 21% reported having a college savings account.

William Darity Jr., a professor of public policy, African and African American studies, and economics at Duke University, has studied the wealth gap extensively, particularly its effect on Black communities. He believes that the narrative of financial prosperity tied to individual decision-making and personal responsibility is completely inaccurate.

Tim Kaiser, an associate professor of economics at the University of Koblenz-Landau in Germany, analyzed over 70 experiments in the field of financial education, and his findings support Darity’s view. Kaiser and his team found that financial education can have sizable effects on financial knowledge and on some financial behaviors, but that those effects did not differ by income and depended on participants having adequate financial resources.

For example, programs aimed at educating people about saving do work to a certain extent: Participants report saving a greater proportion of their income—as long as they’re not facing financial hardship and have the resources to do so. Kaiser said that it is also relatively easy to target process-based outcomes like budgeting that don’t depend on access to resources. If people are given budgeting knowledge and tools, they generally report that they’re able to create a workable budget and stick to it faithfully.

The EVERFI data echo Kaiser’s analysis: Students from all income levels come into financial education courses with limited knowledge across the board, and financial education helps build knowledge and skill. For example, only 32% of all students felt prepared to check and maintain their credit score before engaging in a course; that number jumped to 57% post-course.

Still, Kaiser is quick to note that findings about the effectiveness of financial education do not imply that financial literacy is a solution to the wealth gap.

“If you focus on [financial] decision-making, you implicitly blame the individual, and that’s a highly dangerous narrative to cater to,” Kaiser said. “[Financial education] is not a silver bullet, [and] the wealth gap is not due to [financial] illiteracy.”

Rather, research has found that the wealth gap is driven by a number of complex factors, including a lack of access to capital, a lack of financial systems in minority communities, and widespread racism in the financial services industry.

Darity points to a long history of government policies that promoted wealth accumulation for white communities to the detriment of Black communities as a main driver of the wealth gap.

He begins with slavery and its aftermath, when freed slaves were promised 40 acres of land each, which they largely did not receive. Around that same time, about 1.5 million white families were given large land grants in the Western United States under the Homestead Act of 1862. Darity estimates that there are currently about 45 million living white Americans who are beneficiaries of the Homestead Act through intergenerational transfers of wealth.

Moving into the 20th century, he notes that the primary vehicle for wealth accumulation shifted from land ownership to homeownership, but policies and practices were no less discriminatory, from racial disparities in the implementation of the G.I. Bill to the practice of redlining, or designating certain (usually majority-Black) neighborhoods as undesirable and denying mortgages and financial services on the basis of that designation.

In addition to an overall lack of generational wealth as a result of these policies, minority communities also face racism within the financial system, according to a new report from consultancy firm Edelman. The report, published earlier this year, surveyed 1,500 people about their experiences with the financial system and found widespread perceptions of racism and unfair treatment among respondents of all races and income levels.

“There needs to be an acknowledgement by financial institutions and the leaders of those institutions of the systemic inequities that exist,” said Maxwell Young, who led this research at Edelman. “The system has been designed in a way that affects multicultural communities in their ability to create wealth and transfer wealth [between generations].”

Perhaps the most extreme marker of unfair treatment measured in the report was the experience of being denied service altogether at a financial institution; 13% of Black respondents and 26% of Latino respondents reported this had happened to them. When asked about other negative interactions at financial institutions (feeling exploited, mistrusted, condescended to, or unseen) numbers jumped considerably among all races but were highest in the Black community, with 58% reporting at least one of these experiences.

Paul Judge is all too familiar with this reality, and he cofounded Greenwood, a majority Black- and Latino-owned banking platform, to provide access and resources to communities that have historically been underserved by the financial system. Judge grew up in Baton Rouge, where he saw that many people in his community didn’t have access to traditional banks.

“Where I grew up…our view of the financial system was…you pay these exorbitant fees just to access your hard-earned money [at check cashing operations],” Judge said. “And if you don’t have a bank account to cash your paycheck, you probably don’t have a bank…to talk to about getting a car loan or a mortgage.”

Named for the historic Greenwood district in Tulsa, Greenwood is a banking platform that aims to connect Black and Latino customers to checking and savings accounts as well as lending and investment options. Greenwood also aims to keep wealth in Black and Latino communities by awarding grants to Black- and Latino-owned small businesses, partnering with historically Black banks, and enabling their customers to opt into a program that rounds up their purchases and donates the difference to organizations like the NAACP.

Greenwood is currently in beta testing, with 100 users active on the app and a wait list of over 500,000, adding more users to the platform weekly. The company hopes to open the platform fully to all users next year.

“There’s a lot of work left around fair access,” Judge said. “One of the first things we have to do as a country is admit that.”

Given the enormity of the wealth gap, the complexity of its causes, and the arguably small role of financial literacy in filling it, it could be easy to write off financial education altogether. But advocates in the field say that would be a mistake, because financial literacy confers important benefits, even if it doesn’t create wealth in and of itself.

One such advocate is Yanely Espinal, a financial educator and YouTuber. When Espinal started her YouTube channel, Miss Be Helpful, in 2015, she felt as if most financial education content wasn’t created for her.

“There wasn’t anybody who had my background or upbringing,” Espinal said. “I’m the daughter of immigrants…And I was the first generation in my family to go to college…Everybody I saw in the personal finance space didn’t share these attributes.”

Espinal started making videos about topics that had helped her pay off her own credit card debt, like understanding her credit score. Her YouTube channel now has over 55,000 subscribers, most of them in their twenties and early thirties, and she is a passionate advocate for financial education, especially in schools.

“I strongly support financial education in schools,” Espinal said. “No matter what your family situation is, [school is] the great equalizer. It doesn’t matter if your parents speak [English] or if they have a bank account. You get to learn what you can do [when] you earn money.”

When financial education is provided in schools, Espinal argues, there is likely less bias in the curriculum, as compared with education products offered by financial institutions that may profit if people open accounts after viewing their materials. She sees it as a red flag if a financial education program is overly prescriptive, telling kids exactly what to do with their money. Rather, an unbiased curriculum should provide sound information and give kids a framework of factors to consider when making financial decisions, but ultimately allow them the freedom to apply the knowledge to their own unique financial situation.

Jaylen Benjamin and John Carlos Seide have experienced the benefits of financial education firsthand. They both attend Orange High School in Orange, N.J., where they were able to take courses from the EVERFI curriculum on a variety of topics, including financial literacy, entrepreneurship, and investing. Benjamin and Seide say the courses they took increased their financial knowledge and confidence and exposed them to broader possibilities in the world of money.

They learned about topics ranging from the difference between a want and a need, to how credit and debit cards work, to investing in the stock market. For Benjamin, who is now a senior, the course he took freshman year has spurred him to learn about cryptocurrency and to consider a career in financial management.

“I learned about how the banking system works, and I started my own savings account,” Benjamin said. “The course expanded my thinking and helped me pick what I want to do for college.”

Carly Urban, an associate professor of economics at Montana State University, found that the benefits of financial education go beyond simply exposing students to new concepts. Requiring financial education in high school may improve young adults’ credit scores and positively impact college borrowing behavior, particularly among lower-income students or those who are the first generation in their families to go to college. According to Urban’s research, financial education makes it more likely for these students to eschew higher-interest methods of borrowing, like credit cards, in favor of lower-interest ones, like Stafford Loans; to work less while they are enrolled in college; and to repay their loans successfully after graduation.

Like many other experts in her field, Urban sees clear benefits to financial education despite its limitations in addressing the wealth gap.

“I worry that there are people who think financial literacy will solve everything,” Urban said. “There are barriers that are a lot bigger than knowledge. But that’s not to devalue financial literacy as a whole. We still need to inoculate young people against all the scams they’ll face and empower them to make good decisions across the board.”

How Financial Institutions Can Prepare Their Communities for a Recession

Hear from industry experts via a panel discussion on how you can help support consumers when they need it most.

Listen as EVERFI's Implementation Specialist for Washington State, Hanna Kim, discusses how to bridge the gaps in education that students face today and how to utilize EVERFI in your classroom.

Tools to Track the Impact of Your Financial Education Program

Learn learn how data and reporting can help you better share the impact of your financial education program.

By clicking "Submit" you agree to EVERFI's Policy and to receive communication about additional resources and information we think may interest you.
Complete the form below to receive your copy of "Investing in Impact."
Skip to content